As Tesla’s Supercharger charging network continues to grow, take a look at how the network has quietly grown over the five years since the first Superchargers were installed in Norway back in 2013. While most electric vehicle owners recharge at home or at work while the car is parked, the Supercharger enables convenient, long distance travel. The Superchargers are placed on major highways on all well-travelled routes across Europe. The average charge time for Tesla cars on long distance journeys in Europe is only 30 minutes adding up to 270 km of range, allowing owners just enough time to stretch their legs and grab a bite to eat before getting on their way again.

Today, there are over 400 locations across Europe with over 3,200 Superchargers and this number continues to grow. In the last year, Tesla has added on average over eight locations a month, opening on average 20 new Superchargers a week in Europe. The European network started with five countries in 2013 (with Switzerland being among the pioneers alongside Germany, Austria, Netherlands and Norway) and has grown to 23 in 2018. The network now extends from Norway, Sweden, Finland and Scotland in the UK to Spain, Portugal, Italy and Croatia in the South.

Showing how much Tesla drivers love long distance travel, Supercharging has facilitated 850 million electric kilometres across Europe, which is the equivalent of over 1,100 trips to the moon and back, 15 trips from Earth to Mars, or 21,000 times round the world. Despite the majority of charging taking place at home, last month a new charging session was started at a Supercharger every ten seconds in Europe.

Keeping up with growing ownership

Growth of the network over time has increased with ownership in Europe. As the network grows, new stations are generally larger, for example including Breukelen with 28 Superchargers in the Netherlands and, Rygge, a 34 Supercharger site in Norway. Tesla has added capacity to existing locations along major routes, as well as adding density to the network with new sites. In Switzerland, for example, the number of locations has grown to 16 (with a total of almost 150 Superchargers) now thanks to the latest addition of Melide/Ticino. Given the size of the country, Switzerland therefore boosts one of the highest Supercharger densities in the whole of Europe, with multiple further new sites already planned for later this year. Counting in the almost 250 Destination Chargers, Switzerland certainly takes one of the leading roles among all Tesla markets in Europe in terms of overall charging densities.

The Supercharger network in Europe enabled almost 70,000 cross-border trips last year. The two most travelled routes in Europe run through both France and Germany with drivers moving from Northern Europe to the Mediterranean. In fact, Supercharging brings travellers from abroad too, for example in France and Italy where two out of every five Supercharger sessions comes from visitors to the countries and Germany and Sweden where a third of all charging is those coming from abroad. The ever-growing Supercharger network in Southern Europe (Italy, Croatia, Spain) also enables Swiss Tesla customers to reach their favourite holiday destinations far more easily and conveniently.

All directly acquired energy for the Supercharger network in Europe is provided by clean energy sources such as solar and wind.  Supercharging miles have saved 92 million litres of fuel and off-set over 200,000 tonnes of CO2. Tesla leads the industry with the most advanced charging network in the world used by the only cars that are capable of leveraging that power. The ongoing expansion of the Supercharger network will ensure that Tesla drivers are able to quickly, seamlessly and reliably charge their vehicles. Future plans show Superchargers expanding further into new countries, allowing owners to travel even further with the freedom of Supercharging. See Tesla’s Supercharger map and Go Anywhere Trip Planner to explore see where you could go. 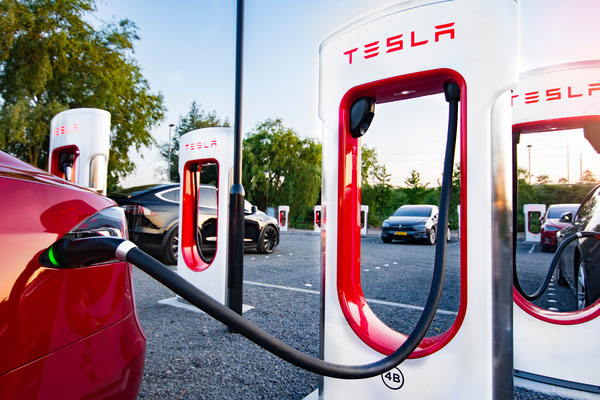